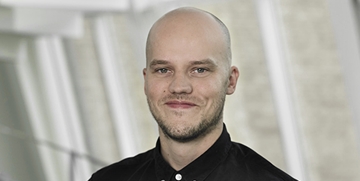 How do you get a robot to glue a loudspeaker membrane without being a robot engineer? DTI's Center for Robotics, together with Spanish Tecnalia and the Danish loudspeaker producer DALI, has worked on making a robot solution that can program itself.

Using the new tool, the robot can program itself when it has received enough input about the process.

- Dispensing e.g. glue is an advanced process for a robot to perform. There are many variables such as: how much glue should be used, where it should be put, how quickly it must be dispensed, and where to start and finish, says project manager Andreas Holmetoft Lyder from DTI and continues:

- With our tool, you enter the known variables in the process and the tool  then calculates for itself how the robot should best put glue onto the surface.

Dispensing liquids
Developing this automated method of coating speaker membranes for DALI has resulted in a new system that makes it easier to make a robot dispense different types of fluids precisely onto items.

- What we have achieved is a general ability for robot self-programming of dispensing tasks, not a one-off solution. We focussed on helping the robot move optimally during the coating process, despite the robot's pathways being very complex. The robot interacts with the dispensing tool itself, controlling how much liquid is dispensed and where it should be placed. In the end, the user simply has only to worry about the process itself, says project manager Andreas Holmetoft Lyder.

The project is part of ROBOTT-NET, where DALI applied for and received a voucher to develop their robot idea. The voucher gave access to approx. 400 hours of free consultancy from some of the best technology transfer institutes in Europe.

See DALI's voucher at robott-net.eu, where you can also see the many other exciting voucher projects.