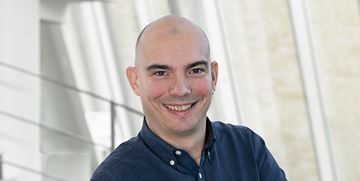 ROS (Robot Operating System) was originally developed and used by universities, nevertheless, the system has now become so popular that robot innovators has started paying attention to it. One of these is the company MiR (Mobile Industrial Robots). MiR is currently developing and testing a mobile robot for the industrial market which should be plain, simple and cheap.

When MiR's first mobile robot is ready to be launched in autumn 2013 the goal a sales price at only 100.000 DKK. The price includes the mobile basis robot as well as navigation and safety systems for it. The price is remarkable cheaper than other mobile robot solutions currently at the market. According to Niels Jul Jacobsen, founder and developer at MIR, it is the development philosophy: “plain, simple, cheap´ along with many leisure hours put in the project, that has resulted in the low price.

Basic robot vehicle for many purposes

MiR's robot is an automatic mobile vehicle for internal transportation and logistical tasks. The basis robot is meant to be expanded with further functionalities, which there is room for considering the low price. Precisely, because the robot can be expanded in several directions the developers have not decided on concrete segments of the industry yet.

“The fields of application are multiple. An example could be hospitals, factories, supermarkets and even restaurants. The idea is that the distributors should contribute with their market knowledge to identify areas of interest to the customers” Niels Jul Jacobsen explains.

ROS is the underlying basis

The developers at MiR have approximately three years of expertise in using ROS and acknowledge large possibilities in the open control system. “The amazing part about ROS is the tools it offers. Everything is open source, i.e. the source code is available if one needs it, a fact that is absolutely different from proprietary tools. We used to use Microsoft Robotics Studio, however, that is completely omitted now.” Niels Jul Jacobsen tells and further explains:

“ROS is the backbone of our robot communication system. Among others, we use the drivers for camera systems and scanners. Moreover, ROS has several different useful libraries.”

“Actually, it is very similar to training a new employee. You navigate the robot to one position, tells it where it is and afterwards where it is supposed to navigate to, after making it familiar with several positions” Niels Jul Jacobsen explains.

The idea of a more plain, simple and cheaper robot occurred on a conference in the USA, simultaneously with prior experience and projects where the platform has been too expensive in relation to the purpose it should accomplish.

MiR has currently an alfaversion completed. The beta version involving the end users is planned to be tested at companies from the end of April and three months ahead. The final launched of the robot will take place at hi(13) the biggest Nordic industrial fair taking place in Herning, September 2013.

Overall, Niels Jul Jacobsen, who beside MiR also is project manager at Mærsk McKinney Møller Institute at University of Southern Denmark, believes that ROS will develop in three directions in the future.

“ROS Industry will reach a certain level of success. Meanwhile, small companies as ours, will start using ROS as the foundation of programming. Last but not least I believe that the main direction of ROS will be defined by the resources the American government will use in their Grand Challenge, which e.g. was the reason for the development of mobile robots in 2005. The next step of the challenge is to develop a robot which e.g. will be able to rescue an unconscious man out of a burning house.  This will to a large extend contribute to the development of ROS with functionalities such as vision, artificial intelligence and Gazebo-simulation being of significant importance.”