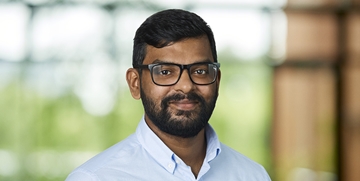 There is great potential for robots to do many of the monotonous, time-consuming - and for most people, invisible - inspection and maintenance tasks that secure society's infrastructure. Capra Robotics and Gumbusters, with support from the Danish Technological Institute and the EU, have solved one of these tasks with a chewing gum remover robot.

Have you ever looked down and seen how many pieces of gum are stuck to the pavement on your stroll through town?

If not, you should try it the next time you're out walking.

The Danish robotics company Capra Robotics, in collaboration with Gumbusters, has tackled the issue of chewing gum remains on the pavement. A prototype of a chewing gum remover robot named Chewy has emerged from this.

- 75 million pieces of chewing gum are spat onto the pavement each year in Denmark, and there are already over 400 million on the ground. It is simply not something that people should pick up for others. But then we can get robots to do it, says Mads Bendt, Founder and Chief Innovation Officer at Capra Robotics.

- We have developed a chewing gum remover robot. The way the robot works is that it drives on the pavement with a camera using artificial intelligence, and that means that we can locate where these pieces of chewing gum are. Then the robot drives over to it, it places a scraper head over the chewing gum. It then heats a biodegradable solvent that is sprayed on. Then we scrub - and after that we have a small vacuum cleaner with which we suck up the rest, Mads Bendt adds.

Capra Robotics makes outdoor mobile robot platforms that can be used for many different things – and now it can also be used to remove chewing gum from the pavement.

The prototype of the robot solution has been created through the EU-funded project RIMA (Robotics for Infrastructure Inspection and Maintenance), which helps small and medium-sized companies to introduce robotic technology to solve challenges within inspection and maintenance. The Danish Technological Institute has led the Danish effort in the European project, and has helped Capra Robotics and Gumbusters with support along the way.

- We are a company with 30 employees and we cannot find time to do everything ourselves. So, if we e.g. have to look at sensors, it is valuable to have good technical help from the Danish Technological Institute, Mads Bendt says.

The king of the pavement

It is not only when it comes to collecting chewing gum from our pavements and nature that help from the robots may be needed. Capra Robotics and Mads Bendt are in the process of exploring other tasks that the robots can help with on the pavements.

- I want to be king of the pavement. It sounds a little silly, but that's where my focus is. Anything to do with the sidewalk, I want to look at. Whether it's chewing gum, cigarette butts, weeds or tiles that are in the wrong place, Mads Bendt says.

And the capabilities of robotic technology don't just extend to the pavement. There is also great potential for robots when it comes to tasks within inspection and maintenance, says specialist at DTI Jeshith Damsbo Anandasubramaniam.

- Today, people perform a sea of ​​monotonous, time-consuming and sometimes risky tasks, when infrastructure such as roads, bridges and water supply must be inspected and maintained. The Danish Technological Institute are working to get companies to realise and utilise the potential of letting robots relieve some of these tasks, he says.

Robots for inspection and maintenance of wind turbines, water streams and roads

The development of a robot to remove chewing gum is not the only experiment in RIMA. Through the four-year project, DTI has helped several other companies with key services to achieve acceleration. It includes support for tests and technology transfer, consultancy and training in robotics in inspection and maintenance.

Get an overview of the experiments on Danish soil here:

Robotic collection of seaweed and algae at beaches and lakes

Robot for locating and removing chewing gum on pavements

RIMA (Robotics for Infrastructure Inspection and Maintenance) is a four-year, European project (2019-2023) which helps small and medium-sized companies to introduce robotic technology to solve challenges in inspection and maintenance - for example water supply, roads, railways, infrastructure in cities and energy production and distribution.

The RIMA consortium consists of 16 leading research organisations from different European countries and seven organisations representing end users and different sectors. RIMA has been financed with DKK 120 million by the EU.