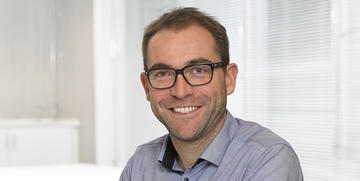 How can we integrate your smart cameras into our production line using UR robots?". The German company ifm was asked this by many customers buying their opto-electronic 3D sensors. As the company did not know the answer, it sought advice from the Danish Technological Institute (DTI).

"We had no know-how about it, which is why we were looking for a consultant partner in Europe", says Ville Olbrich, project manager at ifm.

DTI has therefore helped ifm to program a URCap, so that ifm's customers can now integrate ifm's 3D technology into their production lines to develop picking processes with a UR robot.

"With the URCap they get a plug & play solution which makes it very easy to use ifm's cameras through an intuitive user interface", says Francois Picard, a specialist and software developer at DTI.

"No external computer is needed to set up, program vision algorithms, or operate the camera. Everything can be operated from the robot's user interface. The solution is clear and it is completely transparent to you as a user what to do", he adds.

Like an app for your smartphone
URCaps are software applications that can be installed in collaborative robots from Universal Robots and extend the capabilities of the robots.

"URCaps are just like applications for smartphones", says Francois Picard.

"It is a piece of software that allows you to communicate directly with specific hardware associated with UR robots. So just plug the camera into the robot and it works", he elaborates.

In addition to the user interface, DTI has also helped ifm with the GUI design (graphical user interface) and in deciding what kind of function ifm should assign to the robot programs.

"I am amazed at how quickly the project has progressed and the quality we see today. We are really pleased that we chose DTI to work with us and with Universal Robots in this project", Ville Olbrich concludes.

1. Easy and intuitive
URCaps make it easy for users to configure technologies. Therefore, you do not necessarily have to be a robot programmer to use the URCap.

2. Fewer costs, greater time savings
When using URCaps there are fewer risks because you save time by being able to configure directly from the robot and not have to program everything from scratch - thus greatly reducing the implementation time.

3. Integration of automation technology with UR robots
The user can program complex automation processes involving the use of third-party software and hardware, using an easy and straightforward method. Through the URCap, the user can easily and intuitively connect new hardware and add new commands -- for example, to collect data or perform specific movements -- directly from the robot's controller.

The Danish Technological Institute develops URCaps. We can contribute from the initial phase in which we define and specify, right up to the final certification. We can also act as consultants and help companies that wish to be responsible for the development process themselves. Read more about how we can help you and your company with URCaps.