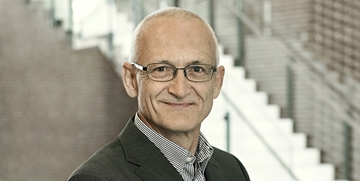 We are currently finalising a number of innovative and groundbreaking new machines and robot systems. One of these is a robot system for pulling ribs from pork bellies. The equipment will be launched by Frontmatec A/S. 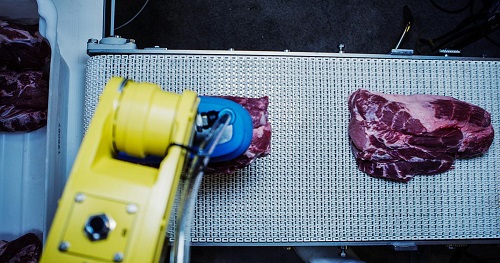 A new method of handling meat cut is the DMRI Hanging-up-and-taking-down concept. It basically consists of different end of arm tools that grab individual meat cuts and hang them up on so-called ‘Christmas Trees’.These solutions are produced and sold by the Kjærgaard A/S. 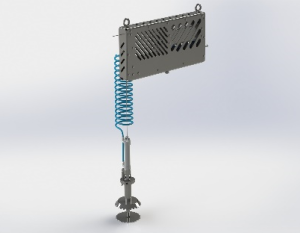 Sometimes the meat cuts are turned and moved directly on the conveyor belt by the operator. Often this is done many hundreds or thousands of times a day. To alleviate the potential shoulder injuries of the operators, DMRI developed a so-called 'Flipper of Cuts'.
This device is an ergonomic and hand-held tool that helps the operator in the lifting process.
The equipment is produced and sold by Overbeck Staal A/S.

Development pipeline
At DMRI, we look ahead and come up with ideas for changing the production paradigm in the meat industry. We focus on effectiveness, quality, animal welfare, hygiene and the working environment.

This has inspired us to look at a radical innovation, moving the traditional meat production from pace line operation to a cell-based production paradigm. We believe it is difficult to increase effectivity on the pace line by much. Instead, we are looking at robots that can cut, prepare and finalise as much of the entire carcass as possible.

We are at the beginning of something groundbreaking and are looking for partners who would like to join us on our journey.