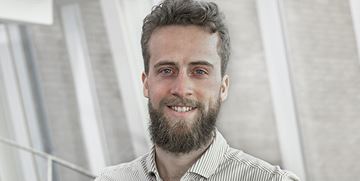 A 3D laser scanner, an accelerometer and a thermographic camera.

The Danish Technological Institute (DTI) is equipping the Spot robot with several different sensors, which enables the four-legged robot to help with a wide range of new tasks.

Spot is already equipped with cameras so that it can orient itself in 360 degrees. In addition, the Spot has built-in sensors and software so that it does not run into people or things and enables it to navigate uneven terrain.

But the built-in sensors have a short range and - in short - only help Spot with where to place its paw next.

So, if Spot is to be useful for real application, you must expand the sensor capacities.

Below, Consultant Kasper Camillus Jeppesen from DTI dives into the different types of sensors that he and his colleagues in the robot innovation halls in Odense are combing in a sensor tower for the Spot robot.

The term stands for "Light Detection and Ranging" and is a method of measuring distance to objects using laser light. Lidar - also called 2D/3D laser scanning - thus functions as a kind of rotating laser ruler.

The type of lidar sensor that DTI uses on Spot is the same type of laser scanner that is also used for self-driving cars. It can both look down on the ground, but also up in the air, giving a detailed 3D map of the surroundings in which the robot moves.

How is the robot oriented and how fast does it move? An IMU can decode it.

IMU is an abbreviation for "Inertial Measurement Unit", and is a device that typically contains an accelerometer, a gyroscope, and a compass.

It is the same kind of sensor that is used in your smartphone to measure how many steps you take in a day.

The IMU in the Spot sensor tower is used to correct input from the other sensors. When the Spot moves around in changeable terrain, it will tilt from side to side and orient itself in all possible directions. You can thus use the IMU's data to find out how the equipment moves, so you can do what is equivalent to an image stabilisation of data from the lidar and the camera.

Here you have many options depending on the type of task you want Spot to perform.

A 3D camera if you want to supplement the lidar with a sensor that can better inspect objects close to the robot.

An infrared camera that can see things that the human eye cannot - for example, the health status of plants by looking at the reflection of the leaves within the infrared range.

A thermographic camera that offers the advantage that you - completely independent of lighting conditions - can find things that differ in temperature from the surroundings. During rescue operations, for example, it will be possible to locate people, as people's heat signature often differs from the surroundings.

Thermography also allows you to detect things that you cannot see with the naked eye - for example, wires in a wall that generate heat. The human eye can only detect light with wavelengths between 400 and 700 nanometers, whereas thermographic cameras are sensitive to wavelengths in the range from 9,000-14,000 nanometers.

Curious about what Spot can do for your business? See how DTI can help you find out.