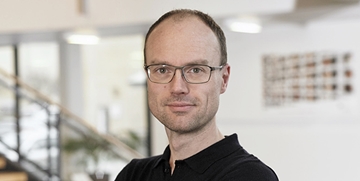 TiN is a well-known hard and wear-resistant coating with a characteristic yellow-golden colour. TiN is not only used in diverse industrial segments to improve the performance and liftetime of tools and components, it is also used for decorative purposes. Usually, a good coating quality requires a high deposition temperature, preferentially above 400 oC, which excludes deposition of TiN on temperature-sensitive substrates like hardened low alloy steels, martensitic stainless steels, some cold work tool steels, and a number of magnetic materials. The Tribology Centre at Danish Technological Institute has developed a new TiN coating for temperature-sensitive substrates by making use of a special Physical Vapour Deposition (PVD) technique.

Sputter deposition
PVD represents a large group of techniques for deposition of coatings in vacuum. An example is the DC sputtering technique, where material is ejected from a target (e.g. titanium) due to bombardment by gas ions (Figure 1). The bombardment takes place because the positive gas ions are attracted to the target material by a large negative voltage. The ejected material condenses in the form of a thin film on the substrates to be coated. This technique is extremely versatile. Applying reactive gases, e.g. nitrogen (N), compounds like TiN can be deposited. During traditional sputter deposition of TiN, a high temperature of around 400 oC is required to facilitate both film growth and the required reaction between Ti and N to obtain a hard TiN coating.

High Power Impulse Magnetron Sputtering
Using the special deposition technique High Power Impulse Magnetron Sputtering (HiPIMS), it is possible to deposit TiN at temperatures as low as 130 oC. The major difference between HiPIMS and standard DC sputtering process is the operating mode of the targets. While the targets in standard sputtering are operated at a DC voltage of about minus 400 V, the targets in HiPIMS are pulsed and reach much higher power values in a much shorter time interval. The short pulses in the HiPIMS mode (typically 5 µs to 50 µs) are widely separated in time, as shown in Figure 2. The energy in each pulse is extremely high, whereas the average power is comparable to that applied in a DC process. The high energy in each pulse gives the depositing species enough energy to form a high-quality coating. However, since the energy is only present in a very short time, no appreciable heating takes place. Typically, coatings grown using HiPIMS are denser and smoother compared to standard DC-sputtered coatings. 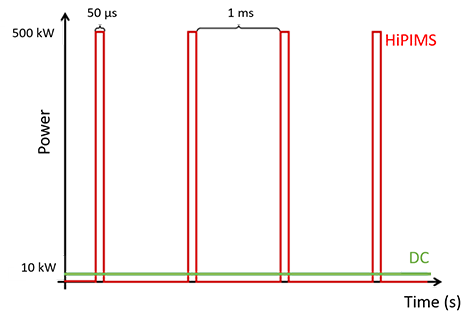 Figure 2: The power output as a function of time. The green line illustrates the constant power (10 kW) applied in a DC process. In contrast, the power in a HiPIMS deposition is significantly higher, but only in short bursts.

Figure 3: Cross-sectional SEM image of the new TiN-HP-LT coating deposited on a Si substrate. The scale bar is 500 nm.