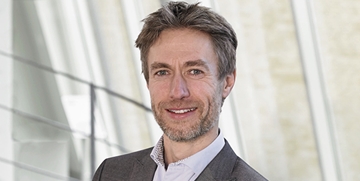 It is more reliable, intelligent, and also faster.

From the beginning of September 2020, Danes no longer have to "settle" with the 4G network technology which most of us have on our mobiles right now. The fifth generation has come to Denmark. 5G wireless communication technology will replace the 4G network in the future, and this will mean far greater stability and 100 times higher speed.

But 5G is about much more than just Danish text messages coming out faster. It will have a very significant effect on the available solutions within robot technology.

On many production floors, manual trucks are being replaced by small robots that find their own way. But indoors does not get the stable GPS signal that you have outside, which can be challenging. It can be difficult for the robots to know their position when thick concrete walls remove the GPS signal.

But 5G opens that possibility.

- Today, location is determined by the robot first drawing its own map, for example using laser scanning, which it then uses to navigate. 5G is not actually designed for localization, but with the right frequencies, base stations and antennas, robot position can be triangulated very accurately, says Rune.

- Another advantage is that the robots can transfer back and forth between the outdoor and indoor environments, which is not possible today without combining many different technologies, he adds.

- But many places around the production halls have challenges with the coverage, says Rune Hahn Kristensen and continues:

- 5G technology supports multiple devices on the web at the same time, which is very effective as multiple robots and devices can connect to the network without compromising speed or latency.

But the big win comes when the processing power is transferred to the cloud.

- Robot solutions can be simpler because you can replace a lot of technology currently carried by the robots with a 5G modem. When data is processed in the local cloud rather than on each individual robot, better coordination and fleet management is achieved and the actual construction of each robot becomes cheaper, says Rune Hahn Kristensen.

- When you then need to update the robots' software or give them orders, you can do it from a central computer over the 5G network without any problems. Thereby you achieve faster reprogramming and a dynamic adaptation of the robots in real time, because you are not locked into having to access them individually to be able to program them.

Mobile robots and self-propelled devices such as driverless trucks have a safety system that ensures that the robot navigates around obstacles. These robots rely on there being no gaps in the data.

- Until autonomous technologies such as driverless cars are sufficiently stable, the robot will need to be monitored, and this can be done with the help of 5G, says senior consultant Rune Hahn Kristensen.

- Wifi and the 4G network can actually be used to monitor robots performing tasks in familiar environments. But if something changes -- employees or other unpredictable elements disturb the robot or its environment -- then it may be necessary to take over or remotely control the process. 5G will make this easier, he insists.

However, the 5G wireless network is not going to be found at the top of your mobile phone's screen or implemented in the robots' everyday life from tomorrow, if you ask Rune.

- Although the new mobile network was officially switched on at the beginning of September, there is still some way to go. But during the next year, 5G options will be rolled out and it will be very interesting -- not least for robot technology, says Rune.

You can read more about how the 5G network will be rolled out in Denmark in the Danish Energy Agency's 5G action plan.