The EU-supported project Compolight, which was led by the Center for Industrial Material Technology, showed good results for Dutch hydraulics company Hydrauvision. The new 3D printed parts improved the flow of the hydraulic systems, thereby eliminating large energy losses while at the same time reducing weight and size significantly.

With the use of Additive Manufacturing technology, the international hydraulic company Hydrauvision, which is based in the Netherlands, was able to reduce pressure loss by as much as 25 % compared to the traditional solution. The company was one of the 12 participants in the European research project "Compolight", which was led by the Center for Industrial Materials Technology at the Danish Technological Institute.
​ Let us help you with AM production

- Naturally, Hydrauvision's results are of interest to the company itself, because it can help bring them miles ahead of their competitors. But the results are also interesting to Danish companies, because it clearly shows how huge the benefits of incorporating Additive Manufacturing can be. In addition, both the aerospace and automotive industries have shown great interest in the results because these particular industries need to be able to reduce the weight and size of a number of  items, says Olivier Jay who was section manager at the Danish Technological Institute at the time of the project.

He explains that the Hydrauvision case involved replacing a traditionally manufactured item in a hydraulic system with an item made using Additive Manufacturing. 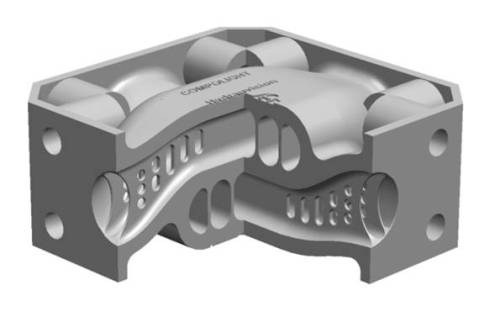 Reduced pressure loss, lower weight, and a compact design
Traditional solutions typically have some loss of pressure. The loss at Hydrauvision occurred due to the construction, which roughly meant that two hydraulic flows had to intersect in very limited space. With the help of Additive Manufacturing, a new solution was created without right angles and with a much more complex construction, so that there was an unrestrained flow of oil and air throughout the system.

Furthermore, Additive Manufacturing has reduced both the weight and the size of the item - from a size of 230x230x54 mm and a weight of 20.15 kg to a size of 80x80x50 mm and a weight of only 0.95 kg. In fact, it would have been possible to reduce both weight and size even further. At the same time, the new 3D-printed item was tested to withstand a pressure of up to 400 bar. 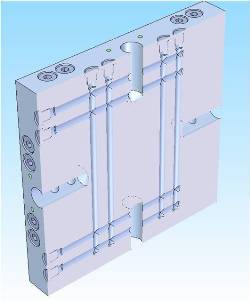 The prospects of this development are huge for Hydrauvision, who works with large vessels and very large hydraulic systems. Now that they are able to reduce the pressure loss throughout the system, they do not need as large a hydraulic system as before to handle the task. In the event of loss of pressure, excess heat is created in the system, which must then be cooled by means of a cooling system. When the production of heat is reduced, a smaller cooling system is needed - which in turn helps to reduce the total energy consumption.

In addition to the above solution, the project also redesigned an even larger hydraulic element used in a pump for a plastic extrusion machine. Here, the original item weighed 55 kg, but by optimizing the volume with complex internal ducts instead of simply drilling straight ducts, the project managed to reduce the weight to 18 kg.

The benefit of Additive Manufacturing for items like these is that they are no longer subject to the same geometric constraints, and therefore the developer has the opportunity to freely optimize the item’s function. In this case, it was a matter of optimizing the pressure loss through the item using flow simulations.

Optimizing the flow in internal channels
Taking advantage of the geometric freedom of 3D printing processes, it is possible to build complex internal channels including variable cross sections and integration of ribs to improve the flow, heat exchange or other parameters while keeping the stiffness of the part. 3D printing technology is successfully applied within conformal cooling, hydraulic parts and many other fields. 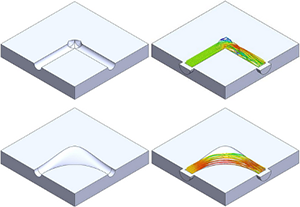 The shaping, and hence the performance, of hydraulic parts are often limited by the use of traditional tools and a natural conservative thinking by the designer.

Traditionally, one would straightforwardly drill two channels which meet somewhere within the block. This method is fast, cheap and requires only traditional tools. However, the flow properties near the corner are seriously degraded by the geometry. 3D printing, on the other hand, provides the designer with the geometric freedom to actually optimize the part with respect to its purpose. In this case, a low pressure loss is advantegeous, and guided by flow simulations, the optimal shape of the channel can be produced directly.

A strong boost
Olivier Jay states that Hydrauvision has subsequently integrated Additive Manufacturing and that the company's development has received a significant boost with participation in the Compolight project.

- That is why I would also like to take this opportunity to encourage Danish SMEs to be aware of similar opportunities to participate in EU-supported projects that can give them an innovative boost going forward. The Compolight project is a good example of this. We started the project in 2008 and completed it in 2011. The project, which involved 12 different companies and institutes, worked intensively to develop new and lighter components, and this has succeeded beyond all expectation, Olivier Jay concludes.