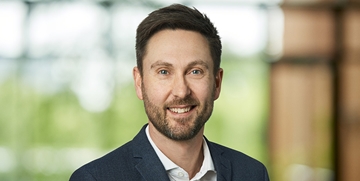 The production line of the future will not be 100 percent automated. This is the assessment of the Danish Technological Institute (DTI), which through an EU project is designing future production with the right balance between man and machine.

In this article a robot expert outline a picture of tomorrow's production floor, which will offer a high degree of individually manufactured products.

Many products have rolled down the assembly line since manufacturing moguls began harnessing the power of machines in the late 1800s.

Today's modern production companies have come a long way since then, setting up efficient and in many cases high-tech production facilities, and progress is continuing.

DTI has been involved in improving work in the business world through new technology since 1906 and is currently involved in a large number of projects that will develop tomorrow's production technology for Danish companies.

One of those projects is the EU-funded SHOP4CF, which (very briefly) is about designing the production of the future with a good balance between human workers and machines.

We asked Rasmus Hasle, who is the project manager at DTI, if he would draw a picture of what factories will look like if you go a handful of years into the future - and what role people will play.

Five of his suggested characteristics of the factory of the future are given below.

For many years it has been a production engineer's dream to reach the point where 100 percent of a factory's processes were fully automated. To turn off the light, go home and let the robots do all the work.

However, there are a few issues with that dream.

Firstly, in most cases it is far too expensive to fully automate. A good rule of thumb is that you should aim to automate 80 percent of your production, as the last (most difficult) 20 percent would cost 80 percent of the total price.

Secondly and fortunately, recognition is growing that the best production system is achieved when there is collaboration between robots and humans. The division of roles is that the robots take on the heavy, boring and gruelling work and humans perform the creative and physically complicated tasks.

There is, to say the least, still a need for people in the factory of the future.

The future increasingly expects a farewell to static production lines as we know them, and a welcome to more dynamic workstations where products are transported and manufactured across the production floor using mobile collaborative robots.

This predicted development is due to a shift from mass-producing many identical products to producing smaller quantities of many different products. Customised production is another name for this.

LEGO figures are a down-to-earth example, where a modular product and production structure enables a large variety of figures to be created with a limited number of components.

However, it is still a great challenge for smaller companies to be able to deliver automated, customised production. It requires a very flexible setup - what production engineers call reconfigurable production - which is also something DTI works purposefully to develop and improve.

Artificial intelligence will lift all levels of the factory of the future - from deep learning-based camera algorithms that enable robots to detect quality defects, to advanced planning software that can predict machine breakdowns and suggest adjustments in production based on price increases on raw materials for example.

Visualising XR technologies such as virtual, augmented and mixed reality will also play a more prominent role in the factory of the future. For example, as decision-making tools that can add a layer of relevant information on top of what the eye sees; and as tools for connecting people and equipment - for example in geographically decoupled factories or in dangerous or sterile work environments.

A burgeoning interest in sustainability will result in more companies offering to buy back their old product from customers. The company can then disassemble it and reuse some of the pieces to build prototypes for new generations of products.

However, this requires changes in product designs so that the products can be easily disassembled for disassembly, remanufacturing and recycling.

My guess is that this type of approach will increase in the manufacturing industry going forward, as the world has begun to seriously reconsider its approach to raw materials.

Companies will increasingly be able to convert their current decision-making process from gut feelings to factual data - and thus find the most optimal way to produce.

With more and better data - and a system to deal with it - it is easier to make reliable 'what if' analyses. What does this or that adjustment mean for quality, the number of products we can produce per hour, basic product cost, etc.?

One can also use data to perform more realistic digital tests of changes in production design. If I connect this new robot to this workstation, what does it mean for production? Does it actually increase the number of finished goods or do you just end up with a bottleneck somewhere else in the factory hall?

In short, data makes it easier and more realistic to determine whether different purchases are worth the investment.

SHOP4CF has an application deadline of 3 August 2021 for their open call, which offers €100K for funding the test and/or development of technology for smart production. Read more about the open call here.

If you have any questions about the above or would like an independent advisor for your upcoming automation project, please get in touch.

Robot technology newsletter
Stay in tune with DTI's robotics innovations by signing up for our newsletter. We'll make sure that your inbox gets fed with videos and stories of tomorrow's technology six times a year.
81081
2687239
robot
​