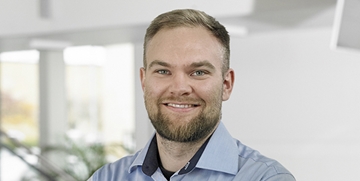 The Odense-based company, Nordbo Robotics, has investigated the possibilities and potential for automating manual processes in the post processing of metal 3D printing. This has been done in collaboration with Grundfos and the Danish Technological Institute in a MADE Demonstration project.

Lift the arm, move it to the right, and turn the wrist.

Simon Says is a classic game that robots can use with great effect to optimize the Danish metal 3D printing industry.

By mimicking human movements in the post processing of 3D-printed metal parts, manufacturing companies can go from slow manual processes to rapid automation of the same task.

The manual bottleneck may be disappearing with the new technological solution from Nordbo Robotics.

In the video below, you can see how Nordbo Robotics' smart robot system works.

In a MADE demonstration project, Nordbo Robotics has tested their MIMIC system, which is a special sensor for UR robots. The smart thing about the sensor is that it is easy to program because it copies the movements shown by the operator.

Specifically, you have a sensor in your hand, and then you make the movement that the robot has to make. Then MIMIC records that movement, and subsequently you can ask the robot to make exactly the same movement - and make minor adjustments to it. It is thus a robotic system that is easy to program for processing methods, and this is where the system becomes interesting for 3D printing: By automating a number of manual processes in the post processing of metal 3D printing, it is thus possible to make mass production both easier and cheaper.

- It requires a lot of craftsmanship to do the actual post processing of the 3D print. This is something that MIMIC is good at capturing. That is why we chose to apply for the MADE demonstration project, because we think that the 3D printing industry is incredibly exciting, and we see a good perspective here, says Jimmy Jørgensen, CTO and co-founder of Nordbo Robotics.

Tested in the Center for Industrial 3D printing

The MIMIC system and a UR robot have been used in 3D printing production at the Danish Technological Institute, where it has been investigated whether the setup could replace some of the manual post processes for metal 3D printing.

Specifically, the setup has been tested on existing cases to see if it makes sense to have it to replace e.g. powder removal or hand grinding of metal parts, where especially the latter is a non-ergonomic process.

- What we have learned in the MADE demonstration project is that it is really easy to teach a robot to make manual post processes for 3D printing with the MIMIC system. So we see a great potential for the future by automating some of the post processing, says Sigurd Vigen Pedersen, consultant at the Danish Technological Institute.

Grundfos has also been part of the project. The pump giant already uses 3D printing in production, and in the long run there could be great value in automating some of the post processing - especially when it comes to serial production of large numbers with e.g. Binder Jetting technology, a fast prototype and manufacturing AM technology.

About MADE Demonstration projects

With a MADE Demonstration project, a small or medium-sized company can receive up to DKK 100,000 in support to solve a specific challenge in the company or test a new technology in production.

There is an ongoing application deadline for demonstration projects.

By being connected with the Danish Technological Institute, FORCE Technology or the Alexandra Institute, you get access to the technologies, knowledge and competencies that are necessary in relation to solving specific challenges.