600 visitors took a trip to the future when the Danish Technological Institute (DTI) opened its doors to give a unique insight into tomorrow's technology as a part of the European Robotics Week 2017 .

With dancing robots, buzzing drones and warm pancakes cooked on an automated stovetop, a real explosion of robotic technologies was showcased on November 15, 2017.

Odense’s Mayor, Peter Rahbæk Juel, opened the event with a speech, after which the swarm of curious guests quickly dispersed to the many stands to experience present and future industrial robots, service robots and welfare technology.

Each corner of DTI's halls was in use as this event was co-located with the culmination of the DIRA Roadshow tour around Denmark's three largest cities – 30 DIRA members were also exhibitors.

- We opened our doors today to get end users to come in and see what opportunities exist within robot and automation technology. It is very important that we hold this type of event so that we constantly push the limits of which technologies come into use in Danish manufacturing companies, says Kurt Nielsen, leader of DTI's Center for Robotics. 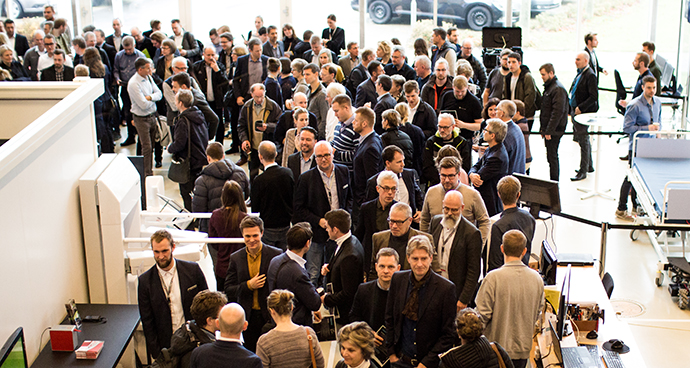 While the ground floor at DTI was filled with the sounds of e.g. buzzing robot grippers and words from the talking robot NAO; the first floor saw presentations by the department's specialists. Here, participants could learn more about solutions within automation, collaborative robots and drone technologies.

The many visitors chatted about what they had learned and seen, and their fascination for the robotics solutions was not easily overlooked.

- I think it has been extremely instructive and very inspiring. There was a wide range of different manufacturers and it has been hugely exciting to talk with them, says Christina Leeson, Development Consultant for Guldborgsund Municipality.

Also Jonas Cort Pedersen from the drone company Sky Level had difficulty hiding his enthusiasm for the event.

- I am pleasantly surprised by so many attendees. And I have definitely been inspired with new ideas to take home to the company, he said.

- Today we open CareLab Innovation, a new platform we have established for the development of welfare technology, said Jørgen Løkkegaard, leader of the Center for Welfare and Interaction Technology at DTI.

When the red ribbon was to be cut, in support of today's theme it was not scissors held by the mayor but the Sanbot learning and interaction robot, which broke the ribbon while the mayor and the rest of the guests watched.

In addition to experiencing a host of innovative technologies, some of the visitors learned more about DTI’s Robot Technology centre itself, which in recent years has positioned itself as one of Europe's leading robot innovation centers.

One such was Gunner Jakobsen, who is director of Biofiber-Damino A/S.

- I got new insights today. I did not realise that DTI could do so many things, he said.

Mayor Peter Rahbæk Juel also emphasized the role of the institute under the ROBOTBRAG:

- I believe robots and robotics can help revolutionize our society, and DTI has a very important role in being a knowledge-savvy partner for companies who have a good idea and some technology they want to try out.