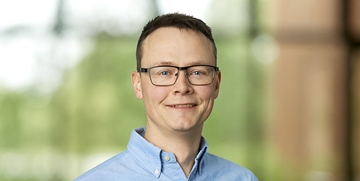 Building inspectors currently have to lower themselves up and down bridges to investigate the bridge's condition. With the naked eye they must be able to spot cracks or other damage to the surface. The Danish Technological Institute has investigated how a person with a drone and a deep learning tool can allow the building inspector to stay on the ground and automate large parts of the inspection process.

Last year, DTI examined possible methods for inspection of masonry and concrete with a tethered drone and tested the concept on buildings. Further development and some scaling up created an upgraded system which has recently been tested on Crown Princess Mary's Bridge in the Fjord Link Frederikssund.

With the same concept - a tethered drone and artificial intelligence tools, including deep learning - visual inspections of the bridge have been carried out to detect cracks. The new thing is that image data is processed live and the result is presented to the operator - while the drone inspects the construction.

- Drones are a great tool for visual inspections of large buildings and structures because they can reach areas that are usually difficult to access. In addition, it is far safer to send a drone up to those heights than if a building inspector is to inspect the bridge manually, says Wilson Ricardo Leal da Silva, who is a Technology Manager at DTI.

It takes 10 milliseconds to process each image
An industrial black and white camera has been mounted on the drone to detect the cracks.

- We used a deep learning tool, where we trained a network to learn how to recognize images of cracks. A live video stream was sent through the tether and down to a computer on the ground, where the images were analysed in order to identify cracks in concrete, says Thomas Høiberg Giselsson, who is a consultant at DTI and contributes vision expertise to the project.

- It takes about 10 milliseconds to process each image once the image is transferred to the computer on the ground and it is a very fast response, he adds.

Although the bridge, which is expected to be completed by the end of 2019, turned out to be virtually free of cracks in the area investigated, the concept was proven and used in a real-life test on a real structure in the type of normal weather conditions that the system must be able to function under.

- You can do a lot in the laboratory, but as soon as you get outside there are a number of factors that you must take into consideration, such as weather. And it can be a limitation if, for example, the wind is blowing too hard for the drone to fly, says Wilson Ricardo Leal Da Silva.

- The project was successful when we showed that the concept works with the tethered drone and deep learning tool, so that it is possible to detect cracks on site, he adds.

The project is supported by the Danish Agency for Institutions and Educational Grants under the Ministry of Higher Education and Science.