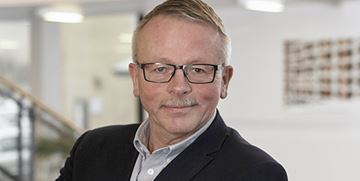 It was quite a task for the product development experts to get 5 suction channels and 5 opposite channels for scalding steam built into a flimsy handle. But they succeeded, and now the new five-finger steam suction is ready to be applied to the Danish slaughterhouses.

SteamVac Tubular 5 is the name of the innovation that makes it easier for slaughterhouse workers to suck unwanted items such as hair, blood and manure residue away from the surface of the slaughtered animal. 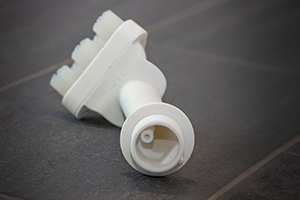 - The handle acts as a type of vacuum cleaner that can simultaneously kill bacteria using the steam. The five-finger version is a further development of the old model, which instead of silicone fingers has a smooth mouthpiece. The five-finger version is especially suitable for cattle and lamb slaughterhouses and particularly for skinned animals, because it can remove various contaminants in an efficient and fast way - way faster and better than a knife. So I expect it to be sold to many slaughterhouses, says senior consultant Hardy Christensen of the Danish Meat Research Institute (DMRI).

The handle gave me gray hair
DMRI is one of the country's leaders when it comes to development of technology that can make Danish slaughterhouses some of the best and most efficient in the world. The institute, which became part of the Danish Technological Institute in 2009, is the inventor behind the new handle, and its development took place during 2010 in close collaboration with the experts in the Center for Industrial 3D Printing.

The special feature of the handle is that it has five soft silicone fingers that - a bit like squid arms - can follow contours on surfaces very closely.

- I’ll admit that the handle was giving me gray hair at one point. Although it is a simple technology with a total of 10 channels with suction and steam, it is a complex task to get a lot of tiny internal channels distributed over 5 larger channels, without the handle becoming too clumsy and unmanageable. It was also a challenge to make sure the handle remained easy to clean. There has been a lot of ping-pong as well as tests and discussions back and forth, and between 6-7 prototypes were made before it hit the spot, says Olivier Jay of the Center for Industrial 3D printing. 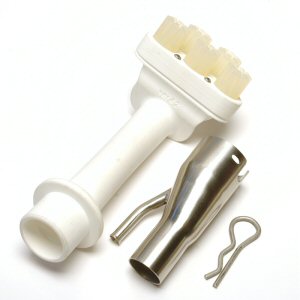 Satisfying that it’s so fast
Both the prototypes and the finished handle are made of plastic material at the Center for Industrial 3D Printing's advanced 3D printers - that is, they are built layer by layer. It is simply not possible to manufacture the handle using traditional manufacturing methods due to the complex internal channels. So in this case, the 3D printing technology has really proven its worth.

- The technology has also enabled us to make revisions to the prototypes in a very short time. Almost five minutes after we received feedback on a test at a slaughterhouse, we can change the CAD drawings and launch a new prototype that we have in hand a few hours after. It is satisfying in a development process that it is so fast that you can keep the red thread and not forget the goal and move the focus. The 3D printing technology ensures short development, and the results are improved, says Olivier Jay.

Do you face a complex development task or a product that needs to be produced in small series?
Contact us and find out how we can help you.