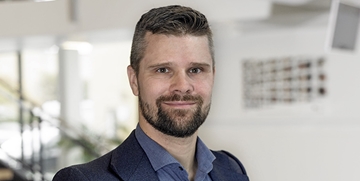 Even the best idea can struggle to get off the ground without the right direction and the necessary funding. The Danish start-up Reblade was aware of this, so they sought help from the Danish Technological Institute.

Reblade is a Danish start-up that focuses on servicing wind turbines in a much easier way than before. Specifically, they want to use drone technology to service the leading edges of the wind turbine blades – i.e. apply a new coating to the leading edges so that they have better aerodynamics and thus produce more power, while also having a longer life. By using a drone instead of doing it manually using a platform or rope, they can do it much faster and more flexibly than the existing solutions – in fact, they can reduce the service time per blade from nine hours to just nine minutes. Furthermore, the solution increases the safety for the crew.

The technology - in which 3D printing is also used - has great potential, and Reblade has a lot of faith in both the technology and the market. But they were also in a situation where they needed capital to grow, and they needed to get knowledge and partnerships into the company to be able to unlock the full potential. Here, Reblade believed that, among other things, research funds were needed.

Help with applications – and the business foundation

In order to move forward with the applications for research funds, Reblade turned to the Danish Technological Institute's specialists in the Center for Industrial 3D printing, as they have extensive experience in applying for funding. Here, they had a good overview of the entire funding landscape and the various support options. Consequently, they could make a tailored plan for which schemes should be applied for, how they should be applied for, and in what order it should be done - and at the same time they ensured that there was a common thread throughout the process.

We have helped Reblade by creating a complete roadmap for how we can apply for a wide range of different schemes over a six-month period, which can help finance Reblade's development and growth. This journey has covered everything from scouring the landscape for different funding opportunities to finding out what matches Reblade and their case - so we applied for the right kind of funding

As part of the process, the Danish Technological Institute has helped Reblade coordinate and write the applications, and in some cases helped build consortia and find partners. In other cases, Reblade had partners who could be included in the application. In the process, the Danish Technological Institute also made a plan for reapplying in the event of a lack of funding in the first place – thus maximizing the output over the course of the six months.

- We have also helped Reblade develop their business and their business understanding as a natural part of the process. As a start-up they had one business foundation, but as we have tested and evaluated it through the applications and have had to ask critical questions about e.g. budgets and development potential, it has developed quite a bit, says Nikolaj Vedel-Smith, Head of Section at the Danish Technological Institute.

Success with the application and further collaboration

So far, the process has resulted in the submission of five applications, and two of these have been succesful - for instance, a major EU project has been granted. In this project, there is collaboration with an Icelandic company, which the Danish Technological Institute has established contact to. In addition, one other application has progressed to the third and final evaluation round, where it is still in process and waiting to be assessed.

- The value it added to us was that we could still keep focusing on our core work, which was development in the lab, but also apply for the funding that's needed to accelerate our development, says Frank Kjerstein, co-founder of Reblade.

Going forward, the Danish Technological Institute is part of the Eurostars project, which was granted. Here, they will collaborate with Reblade for three years and help them develop their drone – among other things with 3D printing. In addition, future application possibilities are being looked into, and the expectation is that one of the applications will be resubmitted in the spring of 2023.

I would definitely recommend a collaboration with the Danish Technological Institute, because they are able to collaborate with a start-up company, or a company that has a market potential, in order to figure out if they have a funding potential