A tailor-made armchair in concrete with the impression of a human body and created by a robot for urban spaces – this is the result of a collaboration between design company Komplot Design I/S and the Danish Technological Institute. This concrete furniture is a new, creative proposal for how to use the world’s most-used building material to mass-produce future-oriented design furniture with new robot technology. 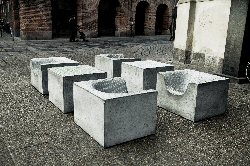 The 500 kg concrete armchair was on display for testing at the Cabinetmakers’ Autumn Exhibition at Rundetaarn in Copenhagen from 21st. November 2008 to 4th. January 2009. Designed by Komplot Design I/S, the armchair has been produced at the Danish Technological Institute’s high-tech concrete workshop. Surprisingly comfortable, the chair is created in a geometric idiom inspired by the square flagstone grid in which humans have left a permanent impression.

– We have never made concrete furniture, so it was a huge challenge, explains designer Boris Berlin from Komplot Design I/S. Boris Berlin finds concrete a fascinating material to work with because it is hard and heavy as stone but as workable as butter during the creation process, not to mention a durable material in all kinds of weather.

The designer’s digital models of the furniture were used to make production programs for the robot at the Danish Technological Institute. The robot has used these programmes to cut prototypes of the chair and table in blocks of polystyrene, which were used to create a silicone mould. The Institute contributed to the creative process by providing material competencies and knowhow. Consultant Lars Nyholm Thrane from the Danish Technological Institute and Boris Berlin from Komplot Design I/S both believe that there is a growing market for creative and visionary use of concrete.

- There are virtually no limits to creating fun and different geometries and surfaces on concrete constructions. We have only seen the tip of the iceberg when it comes to applying concrete in furniture production, predicts Boris Berlin, who will continue to work with ideas for the future mass production of individually designed concrete furniture.

The organisers of the Cabinetmakers’ Autumn Exhibition assessed that the outdoor set of furniture in concrete offered an interesting supplement to other innovative furniture in wood, steel, rubber and wicker at the exhibition.

Concrete is a promising and innovative material. We were thrilled to have the concrete furniture at the exhibition, as we wanted to show the world that Denmark is among the international leaders in furniture design, says head of secretariat Karin Carlander from the SE Secretariat, which organised the Cabinetmakers’ Autumn Exhibition.
The concrete furniture has been sold to the Danish Arts Foundation. 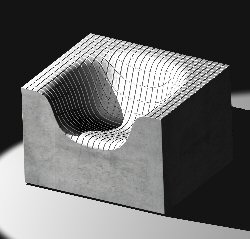 Visualization of the tailor-made concrete armchair.