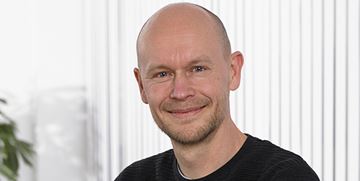 The development of digital 3D modelling tools has given architects entirely new possibilities to experiment in free expressions of shapes, and, thanks to its high shapeability, concrete may take a leading part as the preferred construction material.

Inevitably, traditional work methods based on craftsmanship will have an alternative in the form of new technologies to match the digital development.
The Danish Technological Institute has accepted the challenge by establishing the High Technology Concrete Workshop.

Inaugurated in the summer 2007, this workshop is equipped with a fully automated concrete mixing plant and a robot cell with a 6 axis robot. The robot, in particular, is a key tool in the research of new methods to digitally producing concrete formwork.

One of the methods developed is a formwork system used to manufacture a unique concrete element that it would be very difficult to produce through traditional methods.

Firstly, the concrete element was shaped using of 3D modelling tool. Then the digital data was transferred to the robot that subsequently milled out two mould halves in expanded polystyrene.

The mould halves were then joined in a traditional formwork and subsequently filled with self-compacting concrete. The principle has been upscaled and tested in full scale, and proved that the principle may be transferred directly to be implemented in construction.

A major challenge when developing new principles for formwork is to identify the best suited formwork materials for digital fabrication. Experiments have shown that expanded polystyrene possesses several of the properties that are required of a new formwork material. The material is cheap, strong, easy to process, and at the same time easy to dispose of because polystyrene consists of 98% air.

Moulding sand is another exciting formwork material that primarily is used in the iron and metal industry today. Moulding sand is relatively easy to mill to the shape desired. Moreover, it has the advantage that the sand can be reused. Furthermore, experiments have been made with the surface texture by milling in other materials and applying a coating. Tests with silicone and rubber have proved to give smooth surfaces in different variations.

The application of robot technology to develop new formwork principles creates countless possibilities to meet the requirements of the future digital architecture.
Thus, the formwork materials of the future may well be moulding sand, polyurethane, and polystyrene, and the release agents may well be latex, silicone, and bioresin.
At the Danish Technological Institute, the course is shaped for the digitally manufactured formwork of the future, and this field will be intensively researched for the many years to come.