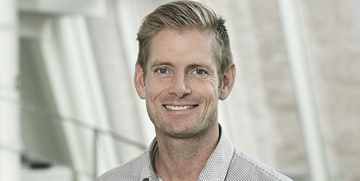 In a MADE demonstration project, the Danish Technological Institute (DTI) and DanRobotics helped the Funen company SBS Friction to automate an almost impossible process.

Imagine riding a motorcycle along winding roads with the wind pushing at your body while the bike sweetly follows every movement - right until the traffic lights turn red and the carefree ride is interrupted while the motorcycle’s brakes do their job.

SBS Friction in Svendborg is a factory that makes brake pads for motorcycles, wind turbines and other things.

It was a challenge to automate production at SBS Friction because the company produces many different brake pads with large and small variations, and these pads need to be aligned correctly on the conveyor belt. An automated solution faces challenges both on the recognition of different products and the correct placement of them.

The South Funen company therefore became part of a MADE Demonstration Project, where DanRobotics and DTI took a closer look at options for automating the manual process using advanced vision technology.

- The project has reassured me that we will reach our goal. I've got a gut feeling that this is not impossible. So the wish that I have had for a number of years can be made real both technically and software-wise, says Jan Reinholdt Mohrdieck, who is technical manager at SBS Friction.

Carsten Panch Isaksen is a senior consultant at the Danish Technological Institute, DTI, and one of those who has helped SBS Friction on its way to more automation.

- Together with DanRobotics, we have helped SBS Friction find a new way to pick up brake pads from unstructured boxes using 3D vision and some 2D vision, he says.

Although SBS Friction has automated several other processes in their production, so far they have not succeeded with this one.

- The process that we have looked at here is especially complicated because the items that come through have very similar colours. The vision system we have today therefore has difficulty seeing the product, says Jan Reinholdt Mohrdieck and adds:

“We have a challenge with the system we have today, because some of the items can easily lie wrong. When this happens, a breakdown occurs when they arrive at the machine. An accident can easily cost 8,000 kroner, and Carsten has convinced us that these accidents are avoidable. And I will probably use this solution in many of our other processes as well.

Lars Glud, Vision System Engineer at DanRobotics, is also satisfied with the MADE Demonstration Project.

- The interesting thing is that we have combined several systems and thereby achieved a production that was not previously possible. And we have expanded our knowledge of vision systems in this collaboration with DTI, and we have expanded our horizons about where we can use our technology in Denmark, he says.

For the benefit of others

Many Danish companies have many product variants and therefore an automation challenge that requires a high degree of flexibility. It is therefore not only SBS Friction that can benefit from a solution based in advanced vision technology that can quickly be adapted to recognize different items, like this solution that Carsten Panch and Lars Glud have created.

- This technology with 3D bin picking is also interesting for many other companies that work with items that lie unstructured in boxes. Our solution provides many great opportunities to automate some of these previously manual processes, says Carsten Panch Isaksen.

- I think that a large part of this project can inspire and be used by other companies that face similar issues.

MADE Demonstration Project is made possible by funding from the Danish Industry Foundation.

Here you can read more about the possibilities in MADE. The Danish Technological Institute is part of MADE.