In collaboration with the Danish Technological Institute, Manigrip developed an auxiliary tool for arthritis patients who experience challenges by holding on to narrow objects, such as pencils, cutlery and toothbrushes. Thanks to 3D printing, the entire development process took less than half a year, and along the way Manigrip had access to all competences under one roof at the Danish Technological Institute.

Manigrip was established in 2017 by four entrepreneurs, including Henrikke Kylén Pedersen and Thomas Solgaard, but in fact, the idea for the auxiliary tool came into existence back in 2016 during the examination project of an interaction design class at Aarhus University. The auxiliary tool is a grip magnifier, which can be attached to narrow objects and thus give an enlarged grip surface, and in the course of the entreprenurs’ further education, the idea developed. After making the first prototypes in 2018, Manigrip chose to contact the Danish Technological Institute in the spring of 2019 in order to have the grip magnifier completed.

At this point, it was still a concept idea, because even though Manigrip had some simple prototypes with plastic tubes and a website around the concept, it was still at a sketch level. Manigrip was on top of the business part of the concept i, but they lacked the technical background and design experience to realize it, which is why they needed the Danish Technological Institute's development knowledge to move forward.

We had lost a partner and were in a situation where we had to get a lot of prototypes out to different users fairly quickly, and the only place where we really felt understood in relation to where we were in the process was at the Danish Technological Institute.

In the video below, Manigrip talks about the development process and the collaboration with the Danish Technological Institute (in Danish) - the case continues after the video.

InnoBooster started the development
After initially discussing the various options, the Danish Technological Institute helped Manigrip helped apply for an InnoBooster of around DKK 450,000 that could be used to purchase commercial services in both the Center for Industrial 3D Printing and the rest of the Danish Technological Institute - including product development hours and 3D-printed printed prototypes. Here, it quickly became apparent that the existing prototypes did not resemble the finished product.

- When the InnoBooster was in place, we made a plan to have shorter development loops of around DKK 10,000, so we didn't risk getting too far ‘off topic’. These loops included design, print, assembly and testing. Between these loops, we held status meetings with newly developed prototypes that were made using e.g. SLA and SLS technology. Then we looked at the prototypes together and evaluated their performance, says Thomas Westersø, consultant at the Danish Technological Institute and 3D printing expert. 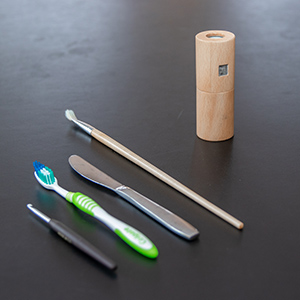 A development loop took 1-2 weeks, and the status meeting then generated a series of feedback - for example, that the grip magnifier should be stronger and more stable, that it should hold the items in a different way, that the electronics should be on the inside and that the battery tike should be longer. Along the way, the prototypes also underwent consumer testing, where arthritis patients gave their feedback to the concept. The first three loops thus focused on finding a functional prototype and the next two loops were used to make five prototypes for consumer testing. Following feedback from the test, some changes were made, and after another three to four loops, Manigrip now has a product concept ready for final production maturity at the manufacturer.

- The major advantage of 3D printing is that you quickly have a prototype ready, and that has been quite important for our way of developing. We have involved users in our development from the start, and 3D printing has been indispensable in this process because we could quickly get new iterations based on the insights we gained from the users, says Thomas Solgaard, co-founder of Manigrip .

During the development process, Manigrip had access to all the necessary competences under one roof at the Danish Technological Institute, including product development, 3D printing, electronics development, mechanical safety and battery safety - this has been a big advantage as it made it easier to maintain an overview and coordinate the progress of development.

Lack of space was the biggest challenge
Specifically, the grip magnifier works by having the grip 'close' around various long, thin items, giving arthritis patients something more to hold on than e.g. a thin brush, a pen or cutlery.

First, however, the concept had to be developed from scratch, including electronics, mechanics and how it all should work, and the only thing that experts from the Danish Technological Institute had to work from was an external framework as well as some examples of items that the tool should be able to handle. In such a process, 3D printing is a great tool because there is a short time from idea to functional prototype, so the process is speeded up, and several different functional prototypes can be made.

After some idea generation, where we researched and tested methods for closing around things, we came up with a usable concept that we tested in an early prototype. When we saw that it worked, we moved forward with it.

At the same time, it was exciting to be so limited in space and find a solution for it - where there is room for both mechanics and electronics. 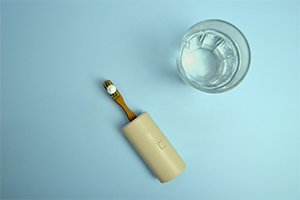 When the mechanics and functionality of the grip magnifier were in place, it was time to develop the controls, and this is where the Danish Technological Institute's Department of Electrical Systems came into play. They have developed both software and electronics, and everything is specified, so Manigrip is equipped for the final product maturation.

- We have designed all components to achieve the lowest possible size and the lowest possible power consumption, and the PCB measures just 2½ x 1 cm. The control is also made so that we minimize the running time of the motor, and the power consumption when the utility is not used is also minimized. This ensures the user a long time between each charge, says Jonas Nyborg, senior consultant and electronics expert at the Danish Technological Institute.

He further explains that battery safety has also been an important issue. Therefore, the most critical battery parameters are monitored both in the software and by a protection feature in the hardware. Thus, all use and safety aspects are considered in the development of electronics.

Ready for production
For Manigrip, it was important from the start that the grip magnifier was developed so that it could be produced with injection molding, although 3D printing could also be an option for pilot production until the quantities are large enough to invest in injection molds.

Through the collaboration with the Danish Technological Institute, Manigrip has gone from idea to a production-ready concept, which can be mass-produced with injection molding, and where both mechanics and electronics are specified and tested - and the whole process took about three-quarters of a year, including consumer testing.

- The collaboration with the Danish Technological Institute has been really good. We think it's been great to experience a commitment on their part that you don't actually expect when you go and buy a service from someone. But there has been a lot of interest in developing the best possible product, also from their side, and we think it has been really nice, concludes Henrikke Pedersen, co-founder of Manigrip.

Manigrip launches the grip magnifier, named 'Wini', in the summer of 2020, and they have already opened for orders.