DMRI - Danish Meat Research Institute was faced with the task of re-producing a pistol for taking tissue samples on male pigs, as the pistol was running out of stock at Danish Crown. However, neither drawings nor injection molding tools existed anymore, and therefore the solution was to do ‘reverse engineering’ using CT scanning and 3D printing.​ 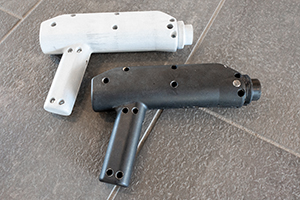 20-25 years ago, DMRI - the Danish Meat Research Institute developed a pistol for Danish Crown used for taking tissue samples on their male pigs, so that they could test the skatole level. The pistol was once mass-produced using injection molding. An injection mold was thus made for the pistol itself, and Danish Crown bought all the finished pistols.

Fast forward to 2019, when Danish Crown has now run out of pistols and therefore turns to DMRI to buy some more. The challenge now is that the original injection mold has been scrapped after just collecting dust for many years, and no one knows who made it or where the pistols were produced. So how do you optimize and re-produce an existing product without having anything resembling a CAD file?

The pistol I had lying around had not been in use, and therefore it was almost in perfect condition - unlike the ones we could get from Danish Crown, which had been used for many years and was practically held together by duct tape.

With a set of pistol shells at hand, it was obvious to have them 3D-scanned at the Danish Technological Institute's Department of Measurement and Quality, so that the shells could be converted into a manageable 3D drawing, which DMRI could work on further.
Let us help you with 3D printing production

- With the feedback we had received from Danish Crown and Kristen Pedersen's knowledge, we were able to optimize the new 3D model by reinforcing some points in the pistol shells so that they became more durable than before. After that, it was obvious to have the new shells 3D printed in Center for Industrial 3D printing, says Simon Nybo Johansen, the consultant at DMRI that has handled the task with new pistols.

Rapid development and production at a lower price
With the design files, which were now optimized for 3D printing, it was possible to quickly print the shells for the new pistols in nylon - and should more guns be needed in the future, they can  quickly be 3D-printed again now that the design files have been made. 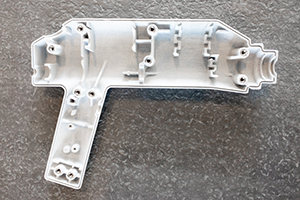 The new pistols have not required new electronics, and the entire process has not taken more than a month, including scanning and measuring, production of design files, design optimization and finished 3D printing of items for delivery. That is about the same time that it would take to make a new casting tool - and then the production would have to be adapted. So this solution has been faster and - due to the low number of pieces - also significantly cheaper than injection molding.

One-stop-shop at the Danish Technological Institute
DMRI has been very enthusiastic about the process and the whole way of solving the problem with CT scanning and 3D printing. It is an efficient and fast method for both development and production - and Danish Crown has also been satisfied with the result. Therefore, DMRI sees a potential in using these technologies in the future, and in this connection it is an advantage to have so many special competencies gathered under one roof at the Danish Technological Institute. One of the great advantages of the collaboration with the Center for Industrial 3D Printing has been the possibility to 3D print in materials that have been approved for food contact.

Initially, six boar pistols have been delivered, but the expectation is that an additional 10 will be produced, and they will be printed in metal-detectable nylon, so that they are less susceptible to dirt.