Marel is a leading global supplier of industrial processing machines for the food industry, and as the company was developing a new support element for industrial cutting of meat, 3D printing in metal was considered at an early stage.

In connection with the development of a new industrial portion cutting module, Marel needed a support element that could stop the meat - e.g. chops - on the production line, hold it while the knife was cutting, and then send the cut pieces further into production.

Specifically, the separation and adjustment of the meat has always been a challenge because of the way in which meat proteins bind the cut pieces after the portion cutting, so there was a need for rethinking.

The result was a support element that consists of a kind of 'meat wall', which stops the meat as the knife cuts, as well as a roll which passes the cut chops on the assembly line. The two elements are designed so that they can move in between one another in a sliding motion and thus work extremely quickly and accurately, while eliminating the problem with the binding of the cut pieces.

Fewer bacteria with 3D printing
Initially, Marel had made a prototype of the support element themselves, which consisted of about 40 parts; a shaft, 19 laser cut metal disks, 18 spacers and two nuts. The prototype was an attempt to make a cheaper alternative to milling the part, and although the production method worked as such, there was a large amount of bacteria in the many joints. 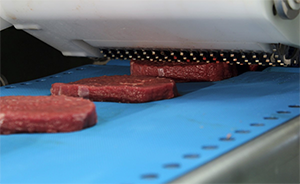 Subsequently, 3D printing in metal was chosen as a solution, and Marel quickly began to redesign the support element specifically for 3D printing, so that it took full advantage of the technology's possibilities. 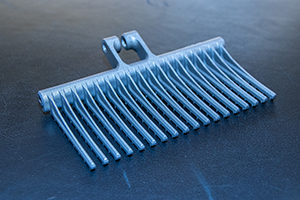 Development course helped optimize design
Working together on the development of the support element, the Danish Technological Institute has helped Marel develop the design so that the part gets the desired surface and the right properties. Furthermore, the Danish Technological Institute has investigated which parts of the support element will be suitable to work on, and how the support element can be weight optimized by making the design lightweight. Less material gives a lighter and faster item, which at the same time becomes cheaper to produce.

Subsequently, the Danish Technological Institute has 3D printed several versions of the support element and helped with consultancy, guidance and sparring along the way.

With Marel's wishes for the support element's features and design, 3D printing has been an obvious choice because of the freedom of design and the ability to assemble multiple parts and functions into one element to avoid bacterial-collecting weld cracks.

- 3D printing is a much cheaper solution than cutting out the item, and compared to laser cutting, 3D printing is also preferable, as we avoid joints where bacteria can accumulate. By 3D printing in titanium, we also achieve a lower-weight item that is cheaper to produce and that can work faster, says Kristian Rand Henriksen, consultant at the Danish Technological Institute.

The video below shows how the support element is 3D printed and what processes it undergoes afterwards. Tites are in Danish. The case continues below the video.

Ready for production
The development process has been fast and effective as Marel had a tight deadline, because the finished machine had to be presented at a trade show. This meant that the overall design quickly came into place, and afterwards there was an ongoing dialogue about design and quality based on a number of printed versions, where several parts have been added to the support element – e.g. the roll that sends the cut meat further in the process.

- We have had a really good collaboration with Marel, and together we have, through the development process, created the finished product, which is now tested and ready to put into production. Regarding production at the Danish Technological Institute, we are also competitive on the price compared to the rest of the Europe, says Kristian Rand Henriksen

With the fully developed support element, Marel has been able to create the ideal solution to the challenge of bonding cut pieces of meat, where they achieve a unique level of accuracy and reliability - even on smaller portions. The separation of the meat is now perfect and it optimizes the whole work process, as well as reducing waste and increasing the quality of the final product.