Danish Technological Institute has inspired and helped small and medium-sized companies to produce unique concrete constructions in small series in its new hi-tech workshop. Since the workshop opened in June 2007, there has been growing interest in the fully automatic robot and concrete mixing plant which turns architects’ most imaginative ideas into concrete reality.

Danes can look forward to coming across more and more exciting concrete buildings. With the help of the new high technology, architects now have free rein to realise their unique visions for the geometry and surfaces that concrete can offer. In practical terms this means that the architect produces 3D drawings of the building which are then transferred to a robot which in turn produces a mould in a flexible moulding material such as plastic or moulding sand. After that the mould is filled with concrete from a fully automatic mixing plant. The concrete poured into the mould is self-compacting, which means that the material flows out into the mould itself without having to be worked mechanically. 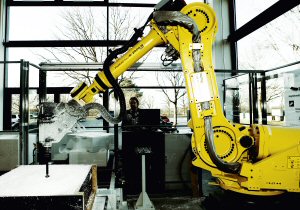 - We have a vision that concrete’s heyday is approaching and that the hi-tech workshop will be a place where architects can realise their more creative and unorthodox ideas, says centre manager Mette Glavind from the Danish Technological Institute’s centre for Concrete.

- Our new technology at the concrete workshop now makes it possible for architects and other creative design people to express themselves through unique and individual constructions. We believe that we can revolutionise the concrete construction business, and in doing so change the image of concrete as something uniform, standardised and boring, says Mette Glavind.

The high technology concrete workshop is central to a three-year project which is receiving a EUR 0.8 million subsidy from the Danish National Advanced Technology Foundation.

One of the companies involved in the project is Spæncom A/S, Denmark’s leading supplier and producer of prefabricated concrete elements. Together with the Danish Technological Institute, the company is part of a project developing unique concrete elements, i.e. concrete with an individual look for, for example, facades and walls.

- Unique concrete constructions will gain a strong foothold in the future. Building owners want to make their mark via their buildings and this will be made possible if we supply unique concrete, for example in the form of facade elements, says managing director Peter Assam from Spæncom A/S. He explains that for Spæncom A/S the establishment of the hi-tech workshop is significant as it enables new methods to be developed for the industrialised production of unique concrete constructions.