When the company Danmatic applied for a MADE Demonstration project, it was with a curiosity to investigate whether 3D printing could optimize a component in one of their machines.

Danmatic's participation in the MADE Demonstration project was an interdisciplinary collaboration with the Danish Technological Institute, which helped test the possibilities for implementing 3D printing. The collaboration resulted in renewed confidence in 3D printing.

An interdisciplinary collaboration was the steppingstone

Danmatic designs, manufactures, sells and services process plants for the bakery and food industry worldwide. It was in this context that Danmatic wanted to investigate the possibilities of implementing 3D printing for one of their components that had direct contact with food. Here, the steppingstone was an application for the MADE Demonstration project, which initiated a network meeting between Danmatic and the Danish Technological Institute. This meeting then turned into an interdisciplinary collaboration. Here, Danmatic had knowledge of the industry and their machines, while the Danish Technological Institute had in-depth knowledge about the 3D printing technology in terms of uncovering solutions and opportunities.
​ Let us help you with AM prodction

The project gave renewed insight and confidence in 3D printing

Following the network meeting between Danmatic and the Danish Technological Institute, the MADE Demonstration project was launched. In order to meet Danmatic's wishes, the ongoing sparring and testing of prototypes was particularly important. The sparring and prototypes meant a renewed insight into 3D printing, and as a bonus, the insight also gave a renewed confidence in 3D printing.

Our confidence in 3D printing has definitely improved. Before we embarked on the MADE Demonstration project, our expectations were that 3D printing had its limitations when it came to the price level and production time - and in fact, we generally just had low expectations for the quality of the parts. Those expectations turned out to be wrong

The freedom of design opened up new possibilities 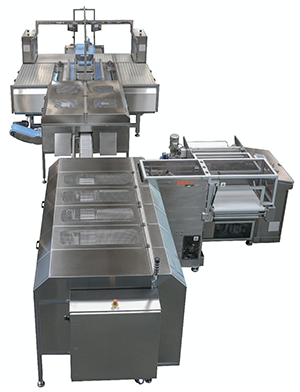 One of the reasons for the renewed confidence was, among other things, the design freedom of 3D printing, which made it possible to come up with new and alternative solution proposals that were adapted to the wishes that Danmatic had for their components.

- 3D printing has provided the opportunity to continuously optimize and adapt the design of the components, which has been a great advantage. You do not have those possibilities with a production method such as e.g. plastic injection moulding, says Morten Lisberg Jørgensen, project and development engineer at Danmatic.

The design freedom of 3D printing also means that the technology can be an advantageous choice for several companies. In Danmatic's case, the knowledge sharing in collaboration with the Danish Technological Institute in particular has made it possible to implement 3D printing in an advantageous way in production.

- For Danmatic, the MADE Demonstration project has been time well spent, and it has made us see 3D printing as an equal alternative to traditional processing methods. If you, as an SME, have an interest and curiosity about what benefits 3D printing can have for a company's development, then I would definitely think it's worth investigating whether the MADE Demonstration project is something for your company, Morten Lisberg Jørgensen concludes.Og netop designfriheden ved 3D-print betyder også, at 3D-print kan være et fordelagtigt valg for flere virksomheder. I Danmatic’ tilfælde har særligt vidensdelingen i samarbejdet med Teknologisk Institut gjort det muligt at implementere 3D-print på en fordelagtig måde i produktionen.

This article was originally published in a different version by MADE

The MADE Demonstration project was made possible by funding from the Danish Industry Foundation.