Washpower's participation in the 3D printing design course DfAM has allowed them to develop a component for their series of washing robots for pig pens. In the future, development with 3D printing may result in a significant reduction in water and energy consumption

The Danish company Washpower was established in 2016, and after that the sales of washing robots and automated washing solutions for pig pens and chicken houses quickly gained momentum. The washing robots are currently sold in over 30 countries – and more countries are on the way.

- The goal for Washpower is to develop user-friendly robots that take on the hard work of washing - and when, for example, the farmer starts his washing robot in the evening, it is important that it has done its job the next morning, says Martin Kamp, technical developer at Washpower.

With an aim of making their robots more efficient and making the automated washing solutions more advantageous for farmers, it was without hesitation that Washpower agreed to participate in the 3D printing design course DfAM, which is initiated by the Danish AM Hub.

During the DfAM course, Washpower investigated whether it was possible to optimize a component for their x100 series of washing robots – they did so in collaboration with the Danish Technological Institute.

- For us it was obvious to investigate the possibility of optimizing a specific component in our x100 series and thus exploit the potential to make our robots even more efficient, says Martin Kamp, who adds:

Along the way, we have had a particular focus on optimizing water consumption during the washing process. It may also turn out that with the newly developed component, we make the robot more efficient, so that you can wash faster and thus further optimize energy and water consumption - or perhaps achieve a greater range. So there are many parameters we have looked at in this project, and that is clearly a big driving force

The gain is greater design freedom and a faster development process

This focus on energy and water savings is dependent on several parts – including optimization of the design and the components that sit in the machine. Therefore, 3D printing was particularly obvious with its great design freedom, which can make new solutions and ideas possible.

What I see with 3D printing is that you can start creating geometries inside the components. It would be incredibly difficult with ordinary forms of machining because you can't get in there with your tool. For example, the component we have worked with in the project is not very large, and here 3D printing has provided new opportunities for printing the internal geometries

In addition to the renewed possibilities with internal geometries, Martin Kamp also points out how 3D printing can contribute to a faster development process, because Washpower can very quickly make physical parts that can be included as functional prototypes and thus significantly shorten the development time until they reach a production-ready part. 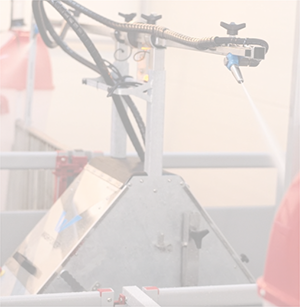 A larger network and new experience

When Martin Kamp has to describe what Washpower has gained from participating in the DfAM course, a larger network and the interdisciplinary collaboration with the Danish Technological Institute stands out.

- If you are considering participating in such a course, you should definitely do it, because it offers a good network. In my world, it is really important to have, because you get out and talk to others who are going through something similar. At the same time, we also had the Danish Technological Institute to learn from, says Martin Kamp, who adds how a good network can be positive in a future perspective:

- Your network can also make it easier to get cross the hurdles that inevitably appear, which is always a positive thing. But in general with 3D printing, a process like this means that you can get a 3D printed prototype that actually works – and you can get it much faster.

Facts about the solution:

Washpower wants to make a patent application based on the results

About the DfAM course

During 2022, Danish AM Hub, in collaboration with the partners Danish Technological Institute, PLM Group, Hexagon and Wikifactory, has taken 15 Danish SMEs through a new innovation course with the aim of strengthening the companies to benefit even more from the technological and business potential within 3D printing. The course is called Design for Additive Manufacturing (or DfAM) and focuses on rolling out 3D printing to small and medium-sized companies as well as providing concrete support and help to work with the technology through design. The specific aim of the DfAM course is to re-design the participants' products or components, thus enabling these to be produced e.g. with greater strength, less material waste, new and better functionality, and on-demand.

Newsletter: Stay updated on 3D printing
Via our newsletter on 3D printing, you will get new knowledge and inspiration, exciting cases, and advice on how you can develop your business and create value with Industrial 3D printing.
79690
3074655
3D_print