The construction industry has had to wait for robots that could be useful for them - but now it seems that the winds of change are starting to blow on construction sites around Denmark.

Technology, automation, and digital tools are beginning to flow onto construction sites as sensors and mobile platforms become increasingly common and usable in an industry that could use a helping hand for the heavy work.

The Danish Technological Institute (DTI) and the Technical University of Denmark (DTU) have therefore joined forces with a set of companies - STB BYG, Desupervised, Capra Robotics, JD Stål, Led iBond, HD Lab and Lorenz Technology - under the auspices of RoboCluster (which is now part of Odense Robotics) on the project CoCoBot, which stands for "Collaborative Construction Robots".

The partners have investigated the options for automating the construction industry with the help of mobile robots and thus improve working conditions on construction sites.

- The construction industry is enormously interesting because it has very large potential in many ways, says Lars Dalgaard, who is section manager at DTI.

- The CoCobot project involves our taking some technology that is known from other application domains and pushing it out into the construction industry to see if we can make it create value, he adds.

Every day on construction sites people have to repeatedly carry heavy loads, balance on narrow walkways far above the ground, or twist to mount elements in hard-to-reach places. This leaves clear traces of strain on the body and relieving this is the purpose of bringing robots into play.

- Where we see great potential is quite clearly in relation to avoiding people getting worn down early. The robots can help with the heavy lifting, says Michael Nielsen, head of strategy and development at STB BYG.

One of STB BYG's current projects is building a day care institution in Horsens, where it would be a great help and relief if robots were involved. 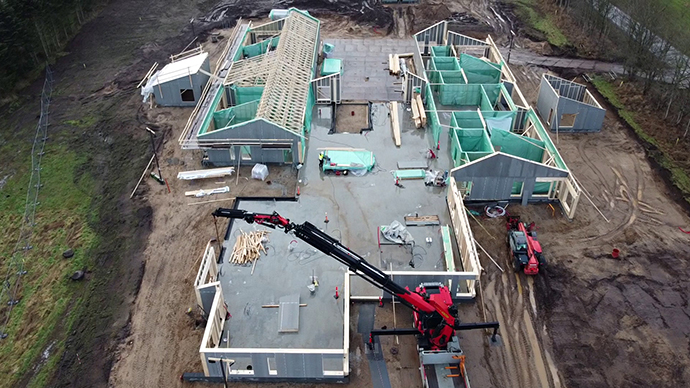 The development is underway

The need for reducing the load in the construction industry is great, but it will require considerable robot development before innovators are completely on target with a solution.

- A construction site is not stationary. In an industrial hall, a robot can drive back and forth along known corridors. On a construction site, the whole logistics can change from hour to hour, says Michael Nielsen.

- For example, a pile of materials in one place because you are in the process of building there, will soon get used up and a new pile will appear somewhere else on the construction site, wherever the work is going on, he adds.

The robot cannot do it alone

Although the robots will be a great help to the construction industry, at present they cannot do it all themselves.

- One of the keys to introducing robot technology in the construction industry is to create a close collaboration between man and the robot, says Lars Dalgaard from DTI, who is the manager of the team that has worked on the robot control and navigation.

- One of the cases that we have looked at here has been the transport of objects, where the human and the robot move an object together instead of the robot doing it alone, he adds.

Together with DTU, DTI has taken a closer look at how the conditions around the robot on the construction site can be perceived accurately.

Take a look around in this 360-degree video, where DTI visits a construction site in Horsens and tests the 'joystick' cobot concept.

Evangelos Boukas and Lazaros Nalpantidis are both associate professors at DTU and have created the mechanism that can translate a force into a signal for robot navigation.

- You do not need too much force to make the robot move. The robot must be able to both follow you and also avoid the obstacles in its path, says Evangelos Boukas.

- DTU has developed the system so that the robot registers the force with which the human pulls the robot. This makes the whole robot system work like a great joystick.

The robot of the future on the construction site

Although there is still some way to go before robots are robust enough for the difficult working conditions on construction sites, the initial experiments point in the right direction - and towards greater cooperation between robot and human.

- Until now, people have worked in the same space as these cobots, but in this project we have upgraded this relationship until the cobot and the people actually work together. It has been a perfect test, which I think has given most of us an appetite for more, says Niels Jul Jacobsen, CEO of Capra Robotics and co-developer of the mobile robot platform around which the CoCoBot solution is built.

Arne Urskov from HD Lab is also positive when it comes to robots for the construction industry in the future.

- Autonomous robots for construction have great potential. The project here has been very interesting as our company develops robot solutions for construction. The knowledge we have generated will be of help to us in the future, he says.

The project was carried out under the auspices of RoboCluster, which has now become part of Odense Robotics. The project is supported by the Ministry of Higher Education and Science.