Mobile robots will become a larger part of our everyday lives in the future. Therefore, it is important that the rolling helpers can decode their surroundings in a natural manner and disturb people as little as possible.

The Danish Technological Institute (DTI) and the companies Desupervised, Coalescent Mobile Robotics and Capra Robotics have therefore investigated how to develop specific behaviours for mobile robots that move around among humans. This work took place under the auspices of an Odense Robotics project called SoCoBot.

- In the SoCobot project we worked together to develop deeper integration between robots and artificial intelligence, which in the long run can enable the robots to interpret facial expressions and human behaviour so that the robots can move in a way that makes it easier and safer for humans that share the same physical space, says Jonas Bæch, who is a consultant at DTI.

Artificial intelligence directly into the navigation

Detecting humans through artificial intelligence is not new, but it is being used a new way.

- The new thing here is that we integrate artificial intelligence directly into the robot navigation. It creates a new opportunity to build many different types of behaviour, says Jonas Bæch.

- Maybe the robots will slow down when people are near, or maybe it will drive around a group of people instead of between them. It could also move in a special pattern that means the human knows that the robot has seen them, he adds.

The combination of artificial intelligence and camera technology makes it possible to detect not just people, but also how each person is oriented and positioned. Adding the ability to decode human facial expressions allows robots to navigate among humans with an even greater understanding of social context - in the long term, of course.

- Artificial intelligence can do a lot to allow humans to move safely near robots without all the responsibility being with the person. AI can also simplify so-called 'coboting', where humans and robots work together collaboratively on some task - and I think that will be an important part of the future, says Jens Skoustrup-Jacobsen, who is Chief Commercial Officer and co-founder of Desupervised.

Robots in the supermarket

One place where you will experience mobile robots in the near future is during shopping trips.

The start-up company Coalescent Mobile Robotics is currently in the process of developing a robot that will support employees in supermarkets, who spend millions of hours every year pushing goods from the warehouse and into the store and placing them on the shelves.

- Previously, mobile robots were reserved for production halls, now we are trying to spread them into supermarkets. This needs a strong focus on the robots' interactions with humans, says Moira Mastrone, who is Chief Experience Officer and co-founder of Coalescent Mobile Robotics.

- It is really important that the robot is friendly and knows its surroundings and can adapt to the people around it, she adds. 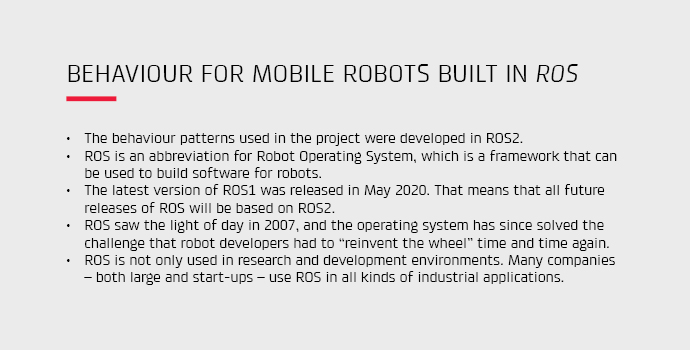 However, supermarkets are just one example. Mobile robots will increasingly also begin to appear in more places in healthcare, on construction sites, in production halls and in our everyday lives in general.

The SoCoBot project was carried out under the auspices of RoboCluster, which has now become part of the enlarged Odense Robotics. The project is supported by the Ministry of Higher Education and Science and the Region of Southern Denmark.