For a number of years, the Danish Technological Institute has assisted Danish power stations in documenting that fly ash from co-combustion of coal and biomass or other non-fossil fuels can be used to produce concrete of equal quality as can be obtained with traditional fly ash from plain coal firing. 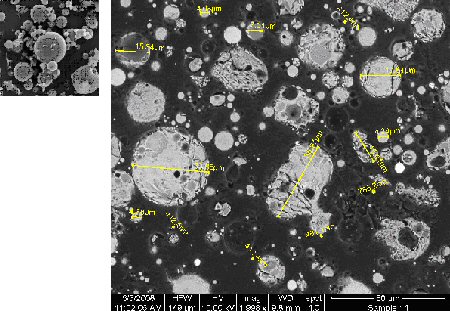 Fly ash particles seen in scanning electron microscope – on the left, the particles are shown as is, and to the right, a section through the particles is shown.

Fly ash is widely used for concrete production in Denmark. Formally, the use of co-combustion ashes has been permitted since the latest revision of the European standard for fly ash – EN 450-1, published in 2005. Combustion of non-fossil fuels is CO2 neutral and thus of interest from an environmental point of view. For this reason, the varying governments in office have legislated to promote to promote an increase in co-combustion at the large power stations in Denmark. However, co-firing is only of interest if the fly ash quality remains so that it can be sold as usual for cement and concrete production and e.g. will not have to be deposited in controlled land-fills.

In order to document the suitability of fly ashes for concrete manufacturing, the Danish Technological Institute has established a test program comprising the determination of the chemical and physical properties of the ashes as well as the determination of fresh and hardened properties for selected concretes containing fly ash. The results for each individual co-combustion ash are compiled in a report that subsequently is evaluated by a monitoring group consisting of representatives from the power stations, the concrete industry, and the Danish Technological Institute.

- “The cooperation with the Danish Technological Institute secures that the co-combustion ashes, which we plan to deliver, will be of a satisfactory quality in relation to the everyday usage at our customers’ (the concrete manufacturers) as well as in relation to concrete durability and future environmental loads from fly ash concrete”, says Nicolai Bech of Emineral A/S.

Following a preliminary documentation from the Danish Technological Institute, fly ash from co-combustion of coal and straw has been produced at the Studstrup power station near Aarhus for more than three years. Other types of co-firing have been investigated, for instance at the Avedøre station, but have not yet resulted in a continuous production.

Nicolai Bech, Emineral A/S, holds that “with the increased focus on limiting environmental loads, especially CO2 emission, we expect that co-firing of coal with other materials will become more widespread in the future”. “For this reason, we will continue the close cooperation with the Danish Technological Institute in the years to come regarding documentation of the usability of the ashes in concrete manufacturing”, he adds.